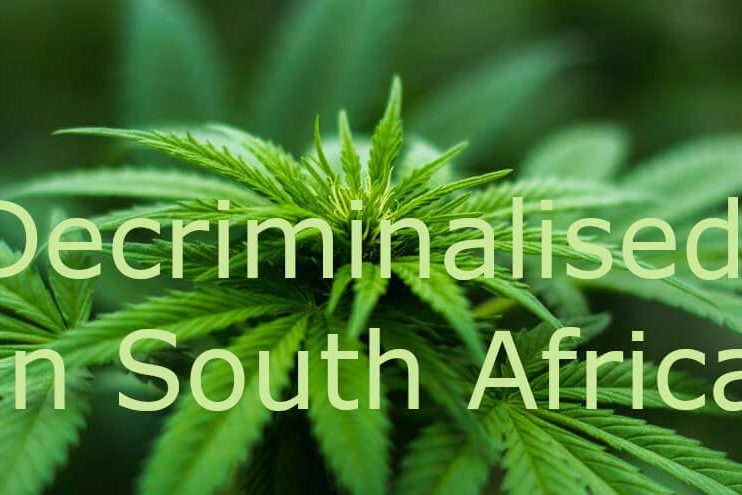 As of 18 September 2018, cannabis has been ruled legal to consume and cultivate by the Constitutional Court of South Africa.

The Bill of Rights section 4, which stipulates that South Africans are entitled to live a life that’s not interfered with by private or government institutions, the ban on personal use of cannabis was unconstitutional.

Cannabis can now be used at home even though the amount has not been specified and that police do need to consider circumstances and make reasonable judgements between personal use and distribution.

In the ruling, the court approved of medical studies which indicated that alcohol caused more damage than cannabis. The implications of this law being passed means that dealing is illegal and smoking publicly are not allowed. However, individuals are free to grow and consume cannabis in their personal capacity.

For many cannabis advocates, the news came as a positive breakthrough after a battle long fought. Many individuals use cannabis for a broad range of medical reasons. It has been proven effective in the treatment of chronic pain, assists with muscle spasms and is said to supposedly improve lung capacity rather than damage it. It could be helpful in the treatment of glaucoma and in controlling seizures and at low doses it is said to reduce anxiety. Cannabis is also said to slow down the progression of Alzheimer’s disease and lessen the pain of multiple sclerosis.

Cannabis can provide relief for sufferers of Arthritis, assist with inflammatory bowel diseases and ease the tremors of those suffering from Parkinson’s. Cannabis is also said to increase creativity and assist with PTSD treatment.

The decriminalisation of cannabis is seen widely as a positive outcome for many people, particularly people who have used it for medicinal and health purposes and/or fought traumatic battles with incarceration and the law.

An Excerpt From The Daily Maverick on the Cannabis Ruling Today

The court saga started when Prince and others took their case to the Western Cape High Court to argued that the criminalisation of marijuana use and its possession was a violation of the right to equality, dignity and freedom of religion.

And because of this, certain sections of the Drugs Act and Medicines Act were declared constitutionally invalid.

Furthermore, Section 22A(9)(a)(i) of the Medicines Act prohibits the acquisition, use, possession, manufacture or supply of cannabis, and section 22A(10) of the same act prohibits it’s sale for other than for medicinal purposes.

The High Court had declared this to be inconsistent with the right to privacy enshrined in Section 14 of the Constitution, “only to the extent that they prohibit the use, possession, purchase or cultivation of cannabis by an adult person in a private dwelling for his or her consumption”.

However for Prince and others, they maintained that High Court judgment still infringed other rights in the Constitution such as the right to equality as it only covered the the use of cannabis at a private dwelling.

Cannabis Use in South Africa

Dagga is grown in many backyards throughout South Africa with the largest production areas being Kwa-Zulu Natal, South-Eastern Cape, Swaziland and in the Drakensberg area. South African cannabis grows even in very poor quality soil and in mountainous areas away from law enforcement and frequently forming a much-needed cash crop in the poor and rural communities.

Dagga is the only mind-altering chemical outside of alcohol, which is in gained broad use and social acceptance in South African culture (in-spite of it being illegal to-date).

Yes it can be. Cannabis is a substance like any other. It invokes positive sensations for many people that can become addictive. Like with any addiction disorder one needs to quantify the damage that the addiction is inflicting to the person or their immediate family/lifestyle.

The detrimental side effects of cannabis addiction include cognitive impairments and/or psychiatric related symptoms are very well documented in the scientific community.

Excessive use of Cannabis

With teens and adolescents, this is most critical. Human brain development and maturation is a process that is guided by the body’s endogenous cannabinoid system and occurs until the early twenties. Exposure to phytocannabinoids released in cannabis consumption disrupt the process of brain maturation and affect aspects of memory, attention, processing speed and overall intelligence.

In adults, using large quantities of cannabis over a long period of time progresses to chemical dependency issues much like heroin and cocaine cannabis will ultimately become problematic not only to physical health but also to the mental health of users.

For individuals that already suffer from psychiatric and mental health conditions such as depression or anxiety, reactions to cannabis can be quite severe and should be avoided just as much as any mind-altering drugs including alcohol.

As with many substances, there is always risks that some people may use cannabis to the point where it becomes detrimental to health and wellbeing.

Physiological and psychological dependence to cannabis is a very real prospect in many cases of excessive use. To better understand cannabis addiction, have a look at our guide to cannabis here and or reach out to our team about how dagga is treated and what facilities there are to help addicts in treating dagga addictions.

Free Yourself Of Cannabis Addiction And Get More Of What You Desire From Life!

Merely by consulting with any of our expert cannabis addiction specialists, you will kick start a substantial journey toward those great beneficial transformations in your existence. Why not very quickly and fast-track individual your evolution from substance addictions. Breakthrough those personal roadblocks, to the life you are entitled to. Learn how to stay devoted to personal growth with substantive down-to-earth personalised strategies on how you can moderate and direct your mind, thoughts and feelings when it comes to cannabis use. If you would like to know more about how to quit smoking weed contact us today.

Transform Your Way Of Life For The Better In A Matter Of Days!