This article briefly outlines a number of sources in of statistical information about alcohol and drug use and common substances abused by youth in South Africa. If you would like to see the fullscreen infographic by Depression and Anxiety Group of the most common substance abuse cases reported please click here.

Recovery Direct is a private addiction care centre based in Cape Town that helps individuals and families affected by substance use disorders to break free from the self destructive cycles of addiction. 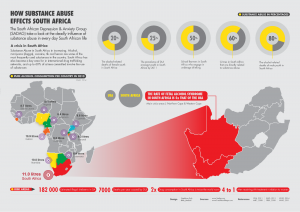 As cited in an article published by The Citizen, drug dependency, in all its forms, is a massive problem that creates serious health, social, legal, and economic problems for the country. The list below contains the most frequently used and abused substances in South Africa. While this has been debated, a collation of data sources have identified the most commonly abused substances starting with alcohol, dagga, cocaine and Mandrax (* source)

This is supported by a statement made in the above mentioned article that “South Africa is battling not only the scourge of certain uniquely South African illicit ‘street drugs’, such as nyaope, but also the increasing abuse of legal medications, such as ARVs, painkillers and cough syrup, leading to what has been called ‘silent addictions’.”

Another trend is the proliferation of dangerous “cocktails of drugs” which are emerging in the country such as “‘nyaope’ or ‘whoonga’ which include a mix of substances like heroin, marijuana, rat poison, methamphetamine, detergent and anti-retroviral or ARV drugs (* source). As in many cases presented in our centre include individuals using multiple substances or poly substance addictions.

In view of this, to think that alcohol or prescription medications are any less harmful or addictive than street drugs is another great misconception. While the production processes and distribution channels may be better regulated, the net effect of substance addiction is much the same irrespective of the substance included.

The most recent SACENDU report, for the first half of 2015, includes information from 75 rehabilitation centres and 10,936 in and outpatients. For most of the patients (32%) cannabis was their primary drug of abuse, followed by alcohol at 23%.

South Africa has no regular representative surveys on substance abuse. There has only been one nationally representative epidemiological study of alcohol, drug and psychiatric disorders, carried out between 2002 and 2004 and mainly to diagnose mental disorders in adults.

At least 15% of South Africans are said to have a drug problem, according to the country’s Central Drug Authority.

The SA National Youth Risk Behaviour Survey (YRBS) found that 15% of pupils admitted to using over-the-counter drugs to get high. The same study found that 11.5% of pupils had tried at least one drug, such as heroin, Mandrax, sugars (a mix of residual cocaine and heroin) or tik.

In South Africa 80% of male youth deaths are alcohol-related and drug consumption is estimated to be twice the world norm.

The stark reality is that drug addiction is by no means a moral failing or an isolated occurrence yet the penalties of illegal drug use perpetuate an ongoing cycle of victimisation, discrimination that outcasts users into more destructive behaviours. Here are some contentious statistics quite widely accepted within the addiction recovery community.

These stats are contentious and frequently disputed however when you take into consideration that “addiction is a hidden disease” the numbers are crudely plausible.

The reality is that people don’t walk around openly admitting to being addicted to drugs and alcohol and what know is that addiction is prevalent across such a broad range of “socially accepted” and widely used substances (alcohol, prescription drugs).

Furthermore many individuals don’t see their addiction as a problem as they benchmark their use against “the norms” that make sense to themselves as individuals and not by what defines addiction.

The Merriam Webster Dictionary Definition : “A compulsive need for and use of a habit-forming substance”.

In most addiction literature it is defined as a “brain disease” whereby “mind altering” chemicals in addictive drugs “reprogram” long lasting and even permanent changes to the brain function that lead to potential harmful and often self-destructive, behaviours.

In complex social environments the spectrum for diagnosed substance addiction disorders is almost infinite. Self-destructive behaviours visible to friends and family are usually the hallmarks of a developed or developing addiction.

For many individuals addiction recovery becomes an only and essential point of survival. The reality is that ADDICTION is a chronic, progressive and potentially fatal disease if left untreated.

How substance use disorder is treated in South Africa is another tricky thing to define.

The way in which substance addiction is currently treated at Recovery Direct starts off with the dealing with the physical substance withdwaw, then getting to the core or what fuels and drives the addiction from a psychological and personal growth standpoint.

Spiritual addiction recovery and punitive punishment methods can be detrimental to the long term outcomes of patients that are forced into sobriety without the right psychological support structures in place.

It is important to know that ALL substance addiction cases are treatable. With the right support in place anyone can recover.

So Which Drugs are Legal in South Africa?

Most drugs are illegal when it comes to the posession of prescription medication without prescriptions or commonly identified street drugs. This approach to substances places incredible strain on the legal system in South Africa and throughout the world.